Australia’s icebreaker RSV Nuyina has risen to the challenges of its first Antarctic voyage, notching up an impressive list of firsts.

During the 39 day voyage over 13,000 kilometres to Davis and Casey research stations, Australian Antarctic Division (AAD) personnel conducted a range of tests on many of the ship’s scientific systems, in a commissioning process with the ship’s operator Serco Australia to set up the vessel for the next 30 years of operation.

The ship also tested its ability to meet Antarctic and resupply challenges, meeting the first of many icebergs, breaking its first fast ice, visiting its first glacier, refuelling its first station and supporting its first helicopter operations.

AAD Voyage Leader Lloyd Symons said the voyage had been a great success.

“Our main priority was to deliver almost one million litres of fuel to Casey research station, to enable the station to continue its important work for another year,” he said.

“With teams working in shifts from Nuyina, the resupply ship Happy Dragon, and the station, we delivered the fuel in less than 36 hours.

“We also successfully delivered two helicopters and their crew to Davis research station, and conducted a range of marine science commissioning tasks, including deployments of scientific equipment off the trawl deck and through the moon pool.”

First off for science commissioning was testing the ship’s acoustic instruments mounted within its hull and drop keel, including the multibeam echosounder used to map the seafloor.

Just south of Tasmania the acoustics team mapped the summit of an underwater mountain or ‘seamount’, higher than Mount Kosciuszko, at about 2500 metres high.

Near Casey, the team discovered a canyon at least 55 kilometres long, 2200 metres deep and 2000 metres wide at the front of the Vanderford Glacier.

“Although we’ve been visiting this region for decades, we haven’t had the capability to do this sort of detailed mapping before,” senior acoustics officer Mr Floyd Howard said.

“It’s a privilege to be able to set up these instruments and ensure that they’re operating correctly, and calibrated, so that we have a future facility for Australian marine science.”

The wet well is a watertight room deep inside the ship, connected to inlets in the hull that allow water to gravity feed into the room and across a filter table at about 2000 litres per minute.

Krill and plankton are delivered in the stream of water in perfect condition for research, without the need for towing trawl nets or stopping the ship.

“The best animals to conduct experiments on are those that are freshly caught and in perfect condition, so that we can have confidence that our results reflect what actually happens in the wild,” Mr King said.

“We caught more than 15,000 krill and tested the wet well in various sea states and ice conditions.

“It was fantastic to wake up in the morning, walk 200 metres from my cabin to the wet well and flick a switch to have live Antarctic krill delivered instantly.”

The krill were transferred to a specially designed containerised aquarium, awaiting delivery to the Australian Antarctic Division’s land-based aquarium.

The specimens will contribute to deepening scientists’ understanding of Antarctic krill and their critical role in the ecosystem, which will strengthen conservation efforts and ensure Southern Ocean krill fisheries are sustainably managed.

Doorway to the deep sea

As Nuyina pushed through ice, the team conducted the first deployment of an oceanographic instrument through the ship’s moon pool.

The moon pool is a 13 metre vertical shaft, four metres square, that runs through the ship’s hull to the ocean.

When its top and bottom hatches are opened, the moon pool allows the deployment of oceanographic equipment such as CTDs (conductivity, temperature and depth instruments), nets, and robotic vehicles, within the relative comfort and protection of the ship.

Technical Services Manager, Michael Santarossa, oversaw a successful deployment of the first CTD to just above the seafloor, 2600 metres below.

“Antarctic scientists are pretty keen to sample Antarctic Bottom Water that’s normally found, as the name suggests, close to the bottom, so you have to test your nerve a bit and lower the package pretty close,” he said.

“On this voyage I’m here to confirm that our equipment is going to serve the scientists that will be using this vessel over the next 30 years.

“In our first deployment, we tested our nerve, we got down there and all the systems worked.”

In the future, many oceanographic deployments will be hooked up to a new deep sea power and data system, developed by Australian Antarctic Division engineers led by Kym Newbery, and tested on the voyage by Mr Newbery and Will Rigby.

The NUTTS – Nuyina Underwater Towed Termination System – will provide a connection between the instruments and electrical-optical cables that can lower instruments up to 8000 metres deep.

“NUTTS will allow us to send one kilowatt of power to underwater systems, and we can use the fibre-optic lines in the tow cable to get more data up the cable than was possible in the past,” Mr Rigby said.

“This means we’ll be able to receive multiple 4K video streams at once as well as tonnes of data from sensors like altimeters, sonars, or sensors on oceanographic instruments, all in one go.”

All the data collected by NUTTS and the huge number of sensors on the ship is stored in an advanced, portable data storage system.

Antarctic Division Data Centre Manager and ‘big data’ scientist, Dr Johnathan Kool, said there were so many data collecting sensors on Nuyina that it could be considered a “floating internet of things.”

“Nuyina is a game changer in terms of the breadth of sensors that it has and the amount of information it’s collecting,” he said.

“And because we’re collecting so much information, we have to think big about how we manage it and distribute it on a much larger scale than anything we’ve done before.”

Free access to the data collected on Nuyina, and elsewhere in Antarctica, will contribute to improved weather and climate models, biodiversity models, navigation maps, and global efforts to map the world’s oceans by 2030.

“There’s a broad range of people who will end up using the data collected on Nuyina’s voyages, including atmospheric scientists, meteorologists, biologists, climate experts, and members of the public.

“In time, my vision is that we can open up our entire Australian Antarctic data collection for big data research.”

It’s a fitting beginning for Australia’s Antarctic ship of the future.

“Bringing Nuyina and its large array of complicated and advanced systems into service is a really important step forward for understanding the Antarctic and Southern Ocean region and advancing Australia’s interests there,” Voyage Leader Lloyd Symons said. 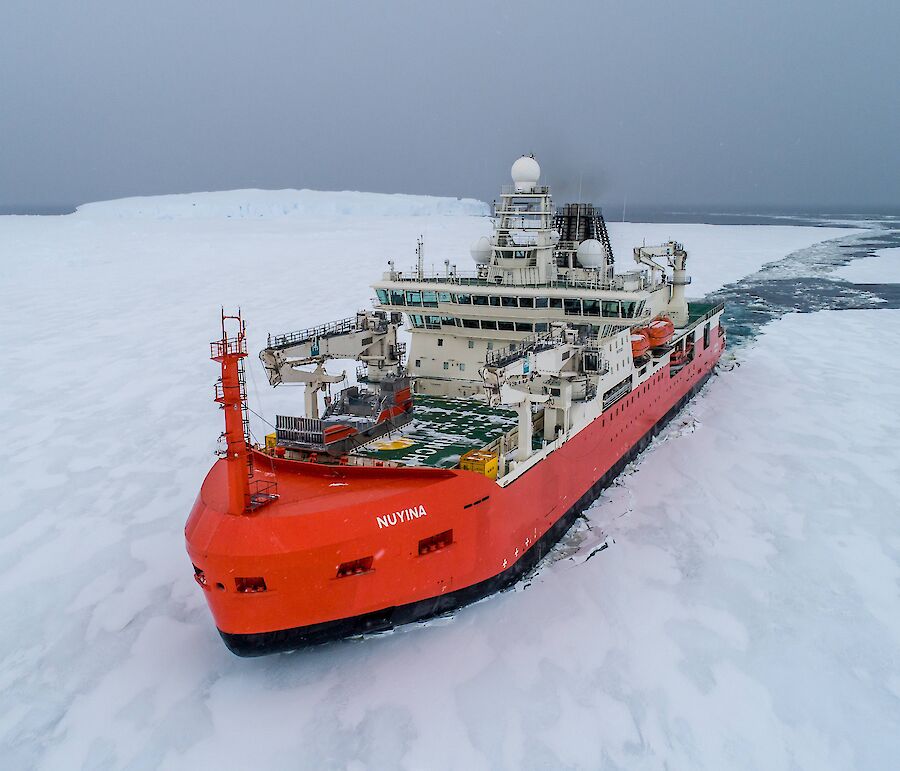