Antarctica and its waters are home to plants and microbes including lichens, mosses and liverworts, algae, kelp and microscopic organisms.

To survive in the Antarctic, plants and microbes need to withstand severe stresses, such as repeated freezing and thawing, little fresh water and limited ice-free growing environments.

98% of Antarctica's continental land mass is covered by ice up to 4.7km thick. It is the driest continent on earth — a polar desert. Most precipitation falls as snow, largely restricted to the region less than 300km from the Antarctic coast. The annual precipitation is approximately 200–500 mm. The Antarctic Peninsula receives about 900mm of precipitation a year while the Eastern Antarctic plateau may only receive around 50mm a year. Except for the northern Peninsula, daytime temperatures rarely exceed 0°C, even in summer.

The Antarctic can be divided into two climatically distinct regions:

The Maritime Antarctic generally receives more precipitation (which may fall as rain in summer) and has milder temperatures, making it climatically more favourable for terrestrial plant life and microscopic animals.

Antarctic flora and their habitats

Lichens (200 species), bryophytes (over 50 species), algae (over 700 species) and fungi are all found in the Antarctic. Most of the algae are single-celled oceanic plants called phytoplankton.

Two flowering plants (a grass and a small cushion-forming plant) are found on the northern and western parts of the Antarctic Peninsula.

Plant life can occur on almost any exposed or ice free rock, in lakes, and in the near-coastal snow and ice.

Terrestrial plant life in Antarctica is found in three types of habitats:

There are three main factors which determine the distribution of plant life in Antarctica:

Of these factors, the most important is the availability of water.

A number of fumarole communities exist on volcanic ground in Antarctica. Fumaroles are openings in the Earth’s surface, which emit steam and gas. Temperatures at fumaroles can reach 60°C only 10cm below the surface. Plant colonies often thrive in these areas because of the warmer temperatures and the limitless availability of free water from steam and melting snow or ice.

Examples of these communities can be found in Continental Antarctica at Mt Erebus (an active volcano which supports communities of soil microbes at altitudes over 3000m) and Mt Melbourne (a dormant volcano with many fumaroles and areas of steam warmed or heated ground). They can also be found in the Maritime Antarctic on Deception Island in the South Shetland Islands (a volcano which last erupted in 1985) and the South Sandwich Islands.

Mt Melbourne supports the only known occurrence of the moss Campylopus pyriformis (a European and Southern African species). Deception Island supports small colonies of a number of mosses that are not found anywhere else in the Antarctic region.

Polar deserts are good indicators of climate change because of the freeze/thaw balance which controls many aspects in the environment. Desert systems are also very responsive to changes in climate.
In the Antarctic, it is thought that CO2, temperature and UV levels will all increase as a result of climate change. There will also be a change in water availability. A warmer climate will create more melt water, and will also increase the amount of available habitat for plants, especially in coastal areas and on the Antarctic Peninsula. New plants may then be able to establish, either naturally or by accidental introduction from humans.

Changes will be more drastic in the marine environment, where climate change is likely to have profound effects on marine microbes. Increased ocean temperatures will likely cause changes in microbial distribution and abundance. Increasing temperatures are likely to increase stratification, trapping marine microbes in near-surface waters where they will experience reduced replenishment of nutrients and increasing exposure to solar UVB. In addition, increased CO2 in the ocean will increase its acidity. Organisms that make structures from calcium carbonate will find it increasingly difficult to deposit these structures in cold Antarctic waters, potentially excluding numerous organisms such as Coccolithophorids and Pteropods from Antarctic waters this century. Increased CO2 concentration is likely to cause changes in the productivity and species composition of marine microbial communities with ramifications for the entire Antarctic food web.

Climate change is expected to profoundly change the circulation of the world’s oceans. The Southern Ocean is a key component of this system because of its role in circumpolar transport of water as part of the global 'conveyor belt' circulation. If the sinking of cold water off Greenland is interrupted by icecap meltwaters, circulation from the Atlantic will be reduced. Similarly, the formation of Antarctic Bottom Water will be reduced if coastal waters around Antarctica become warmer. These sinking waters carry oxygen from the surface to ocean’s abyssal depths, so interruption of the flow would profoundly impact bottom communities.

Because the Antarctic continent is so isolated and largely inaccessible, sampling can only be done infrequently. Much of the early sampling was not done in a systematic or scientific manner. Even today, the number of people researching Antarctic flora is low, compared to those researching the flora in other parts of the world. In the past this has led to some overlap between collections, where a single species of plant has been given two separate names by two different collectors.

Comparatively little is known about Antarctic flora, and our knowledge is constantly being updated by new research. 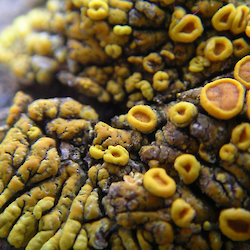 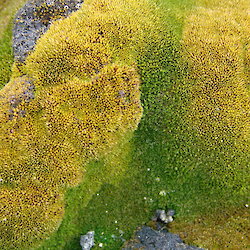 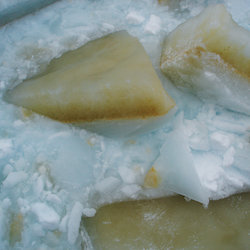 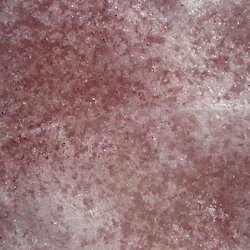 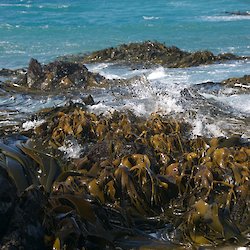 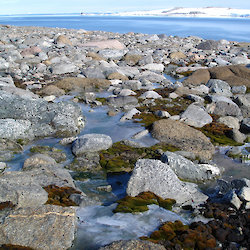 Casey: the Daintree of Antarctica 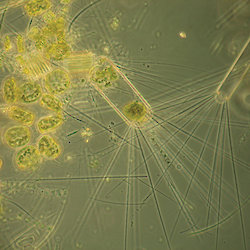