Since Australia’s new icebreaker, RSV Nuyina, was moved to a wet dock in late September, construction of the superstructure (area above the watertight hull) and internal fit-out has rapidly progressed.

The ship’s name and home port are now clearly visible in panels on the port and starboard sides.

Some of the expeditioner and crew spaces are now being fitted out, with ensuites installed in cabins, while the kitchen (galley) and dining (mess) area, and a theatre with raked seating and a raised stage, are under construction.

On the science front, the CTD (conductivity, temperature and depth) hangar, which includes a moon pool, is taking shape. The CTD instrument will be deployed from the ship through the moon pool or with an overhead crane through a door in the side of the ship. The CTD is a critical piece of scientific equipment used to measure ocean salinity (conductivity) and temperature at different depths.

The moon pool is a 13 metre vertical shaft, four metres square, which runs through the ship’s hull to the open ocean. When its top and bottom hatches are opened the moon pool will allow the deployment CTDs, nets, underwater vehicles and other oceanographic instruments, within the relative comfort and protection of the ship.

Sea ice scientists will appreciate the appearance of an exit door from which they will be able to deploy on to the sea ice via a specially designed ramp. The scientists will also have access to an adjacent cargo hold area to store their equipment and mobile laboratories (in modules similar to shipping containers), when the area is not in use for resupply.

The scientific winch room on deck three (below the level of the aft science deck) is also being kitted out with six main winches — two trawl winches, one deep sea corer winch, one deep sea towing winch with electro-optical capability for connecting cameras and other powered equipment, a towed body winch, and a general purpose winch with dynex fibre rope. These winches collectively have over 40 kilometres of cable length spooled on their storage drums.

On the operational side, the switchboards have been installed. These will take power from the ship’s four diesel generators and two shaft-driven electric motor generators and redirect it to run all the electrical components on the ship, including computers, lights and laboratory equipment. In the engine rooms, insulation, cables and pipework are being installed. The forward mooring deck is also being fitted out with windlasses (anchor winches) and bollards.

In the dry dock a range of superstructure blocks are currently being assembled, including the helicopter hangar and the Bridge with its 32 metre wing span. These will be added to the ship before it next turns in the wet dock in November. 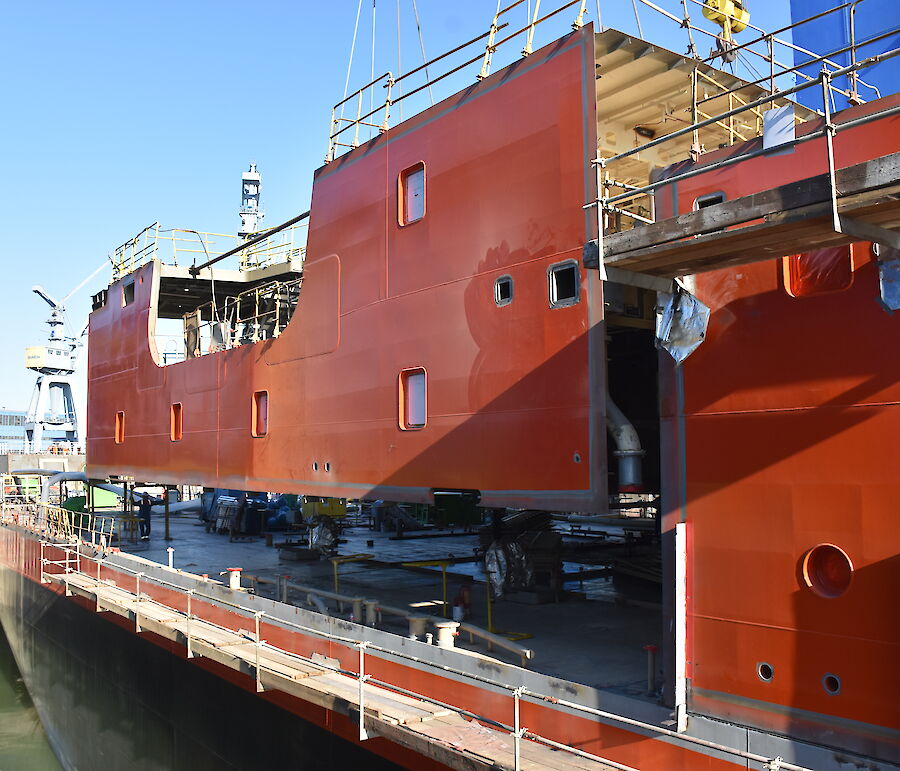 A superstructure block being craned into place above the watertight hull. Photo: Michiel Jordaan 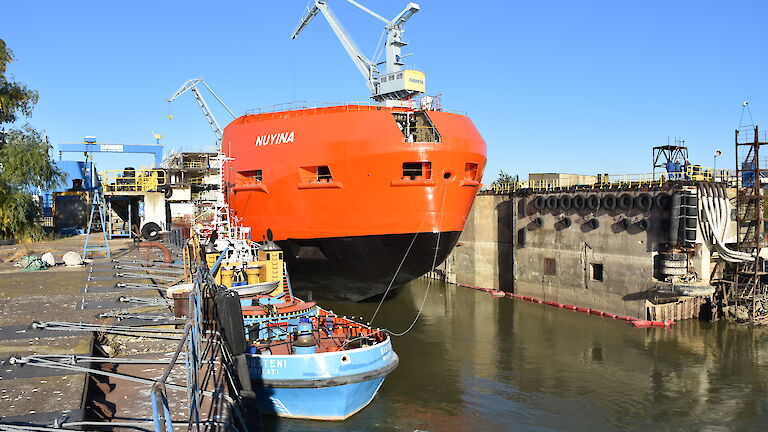 Australia’s new Antarctic icebreaker RSV Nuyina has been turned in the wet dock to facilitate construction of the ‘superstructure’, or decks above… 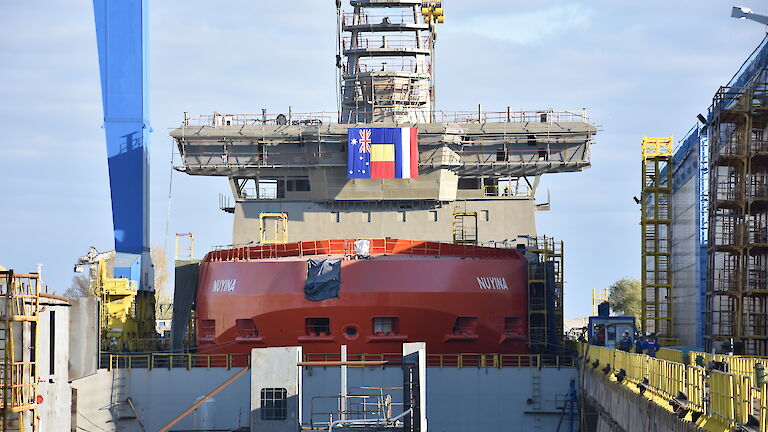