Joining the Hobart-based Serco team, both Captains come to the role with experienced track records working in the Southern Ocean.

Scott has completed more than 50 voyages to Antarctica. As Captain of Australia’s current icebreaker, Aurora Australis, for over 10 years, Scott is familiar with the cold and challenging conditions of the Southern Ocean.

Paul also has extensive experience in the Antarctic, having spent 11 years working for the British Antarctic Survey, and undertaking more than 20 voyages to Antarctica.

Scott has worked with Serco for the past five years; initially as part of the team who compiled the successful bid to design, build, operate and maintain the Nuyina, and then more recently as a member of the engineering team managing the design and build phase.

“I’m really looking forward to seeing the ice for the first time from the bridge of the Nuyina,” he said.

“There’s going to be a lot of people who are very keen to see the ship perform and complete that successful first voyage of the season.”

Scott’s focus on safe vessel management and operation has gained him industry recognition. In 2014 he was awarded the Peter Morris Medal by the Australian Maritime College for improving international maritime safety and personnel standards. In 2013 he received the Australian Antarctic Medal for outstanding service to the Australian Antarctic Program; and in 2006, he gained a Seacare Award for Best Individual Contribution to Safety.

From Tasmania, Scott has lived and worked in Hobart his whole life and is an alumnus from the University of Tasmania’s Australian Maritime College.

“The Southern Ocean is a captivating place to work,” he said. “There is nothing more satisfying than successfully transiting through the roaring 40’s, howling 50’s and screaming 60’s, sighting the sea ice edge before crossing hundreds of kilometres through the ice to conduct science operations or to resupply one of the Australian Antarctic stations.”

Paul Clarke was born and raised in the Falkland Islands, and began working for the British Antarctic Survey as a deck hand in 1994. He has always aspired to become the Master of an Antarctic research vessel.

Paul spent the last decade sailing as a Master for shipping company Solstad/Farstad in the oil and gas industry around Australia and many other parts of the world. He brings with him valuable experience sailing in the ice, and knowledge from the British Antarctic Survey that will complement and enhance the operation of the Nuyina.

“This is an amazing opportunity with Serco and the Australian Antarctic Program to deliver world class support for their polar and science operations,” he said. “I very much enjoy the type of ice navigation challenges, research and survey work that will be undertaken on the Nuyina.”

“It’s a career goal, this type of job. There are not very many of these vessels worldwide, there’s only one in Australia,” Paul said.

“This is going to be one of the best polar research resupply vessels in the world, when it’s completed next year. Who wouldn’t want to be the captain on that?” 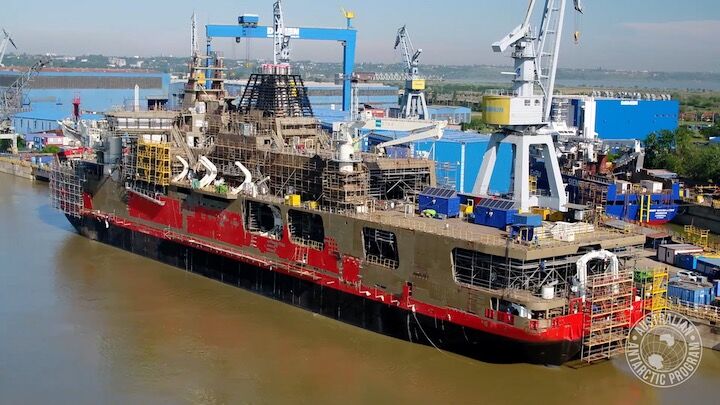