Blue whales are the largest animals ever known to have lived on Earth.

The biggest blue whale ever weighed was nearly 200 tonnes and over 30 m in length.

Distribution: Blue whales, along with minke whales, venture further into the sea ice than other rorquals (such as the humpback and sei whales), and have been seen near 78°S in the Ross Sea. Non-lethal science using mark-recapture methods and acoustic tracking is being undertaken to determine the distribution and abundance of blue whales following the ban on commercial exploitation imposed by the International Whaling Commission in 1964.

Pygmy blue whales are never found south of 50°S, and feed off the southern Australian coast in summer. They grow to ‘only’ about 25 m.

Threats: Southern Hemisphere ‘true’ blue whales were reduced from around 225,000 individuals pre-exploitation to probably less than 2,000 now. In just one area – South Georgia – 30,000 blue whales were killed in the 1930–31 season alone.

The breeding grounds of Southern Hemisphere blue whales are still unknown but are thought to lie somewhere in the deep oceanic waters of the tropical South Pacific, Atlantic and Indian Oceans.

A new born blue whale calf weighs 2.5 tonnes and can, in the latter stages of suckling, put on 100 kg a day.

A blue whale gulps up to 50 tonnes of water and krill in one feeding mouthful, but swallows only the krill.

'True’ blue whales are one of the fussiest eaters in the Antarctic, usually eating only Antarctic krill (Euphausia superba).

Blue whales off Sri Lanka have a song which consists of only 4 long, low notes.

Low frequency moans of blue whales, some of them lower than human hearing, can theoretically travel several thousand kilometres, and at close range are as loud as a jumbo jet taking off. 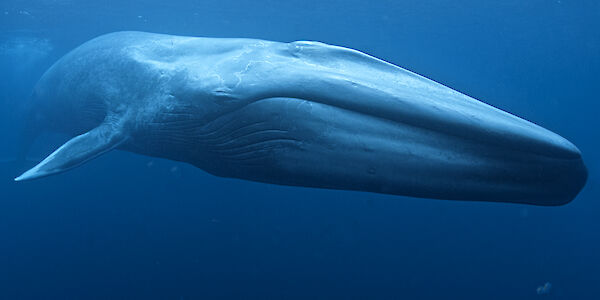 Blue whale D-calls recorded from a sonobuoy deployed in the northern Ross Sea and sped up 4× to raise the pitch to be audible to people. D-calls are thought to be ‘social’ calls made by male and female whales on feeding grounds. D-calls are highly variable across individual whales and across seasons and years.
Credit: Brian Miller Blue whale FM (frequency modulated) calls recorded from a sonobuoy deployed in the northern Ross Sea in 2015. FM calls seem to be associated with animals in groups and may be shorter range, social or foraging sounds.
Credit: Brian Miller Recorded on an Antarctic Division moored acoustic recorder on the resupply route to Casey Station in 2014. The sound is sped-up 8× to raise the pitch. Z calls can be heard from long distances and seem to be produced by individuals, possibly for longer range communication.
Credit: Brian Miller

Tag, you’re it: Researchers look to the skies for tracking Southern Ocean whales

Antarctic krill, blue whales and the power of poo

This content was last updated 5 months ago on 6 September 2022.