Get the latest news on the progress of this project with the team’s blog from the field.

Building a future ocean in Antarctica

Australian scientists will create a ‘future ocean’ under the sea ice off Casey this summer (2014–15), using four underwater chambers to measure the impact of ocean acidification on seafloor (‘benthic’) communities.

Ocean acidification is caused by increasing amounts of atmospheric carbon dioxide (CO2) dissolving into seawater. This causes the pH of the seawater to drop (see ‘Fast Facts’ below) and become more acidic, which affects the ability of some marine organisms, including corals and bivalves, to form shells and other hard structures.

The four semi-enclosed chambers will be deployed 10 to 20m beneath the Antarctic sea ice off Casey station between November 2014 and March 2015.

During the Antarctic ‘Free Ocean Carbon Enrichment’ (antFOCE) experiment, a team of scientific divers, technicians and engineers, will increase CO2 concentrations in the water within two of the chambers. This will decrease the pH of the water by 0.4 pH units, without changing light or nutrient concentrations. A further two chambers will be used as ‘controls’ to track natural fluctuations in pH in the surrounding water. This will allow the team to compare the response of benthic communities exposed to current seawater pH levels, and the more acidic pH levels predicted under future CO2 emission scenarios.

A variety of observations and measurements will be taken to allow the team to determine how benthic marine habitats respond to decreased seawater pH. These include:

The research will assist governments, scientists, modellers and society to understand the emerging impacts of ocean acidification on marine ecosystems and to ensure that the most relevant information underpins decisions to manage the threat.

Find out more about diving under the ice. 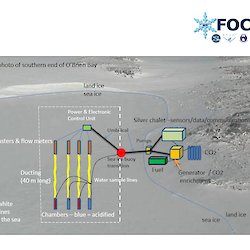 How the chambers work

People in the field 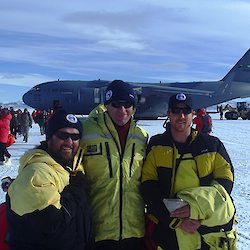 Weekly blog
This page was last updated 6 years ago on 28 October 2014.