Many albatross and petrel seabird species are killed in longline fisheries. Longlining is one of the main methods used to catch fish and occurs in most oceans and seas in the world. While there are many differences in what makes up a longine fishery, there are two main types:

Pelagic longline fisheries target tunas (eg. blue fin, yellow fin, big eye, albacore) and swordfishes. These species are caught from 50–300 metres deep in the water on longlines suspended by floats. Operations vary from small boats that fish close to the coast to vessels that fish on the high seas. Vessels that fish on the high seas might have freezers of 200–300 tonnes capacity and can stay at sea for several months. Pelagic longliners might set out longlines up to 130km long with 3000 hook-bearing branch lines. Branch lines are usually 30–40 metres in length and 50 metres apart on the longline, and are light enough to bob up and down in the water column in order to attract fish. Longlines are set and hauled back in on every day of the fishing operation.

Demersal longline fisheries are also called ground fisheries because they target fishes that live at or near the seabed. Species targeted include hake, ling, cod, sablefish, halibut and Patagonian toothfish. Demersal species are often caught in very deep water — for instance the Patagonian toothfish can be caught from a depth of 500–2500 metres. Demersal longlines differ from pelagic longlines in that the branch lines (holds the hook) on demersal lines are only 0.4m long and are spaced 1.4m apart. This means that even reasonably short longlines might carry a very large number of hooks: demersal longline vessels might set and haul up to 40 000 hooks/day.

The main species of seabirds killed in longline fisheries are albatrosses and other species of petrel. Mortality commonly occurs in the southern oceans south of 30°S, and in the northern oceans north of 30°N.

Species commonly killed in the Southern Hemisphere are:

Species commonly killed in the Northern Hemisphere are:

Any petrel family species that is aggressive and good at seizing prey (or baited hooks) at the waters’ surface, or is a good diver, will be vulnerable to longline fishing.

Seabirds get caught when baited hooks are payed out from vessels during line setting operations. When longlines are set out they flounder near the surface which gives visual cues for seabirds. Seabirds take baits both at the surface or by diving for them. They bite the baits, become hooked and when longlines sink to target depths the birds get pulled underwater and drown.

Seabirds like albatrosses are unable to cope with unnatural levels of death because:

Longline fishing is generally accepted as being the primary reason why many populations of albatrosses and petrels have decreased in number (some populations by as much as 40%) and why many albatross species are listed as being either endangered with extinction or of unfavourable conservation status.

Seabirds are affected by many things that occur in their environments. They suffer from:

Read about how scientists are reducing seabird mortality. 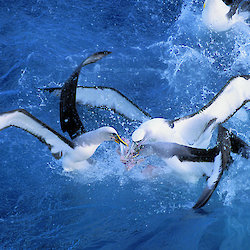 Reducing seabird mortality
This page was last updated 18 years ago on 4 June 2002.