Nuyina has a fleet of small watercraft which provide essential support for science and logistics: a science tender, two personnel transfer tenders, a stern tender and two barges.

Painted in the same International Orange as the mother ship, the smaller support vessels have their own dedicated facilities. These include tailored lifting and securing equipment, power outlets to charge batteries and warm the engines, and facilities for refuelling.

All the vessels have been engineered to be just as strong, reliable and capable in their roles as the Nuyina, operating in temperatures as low as −30°C and up to 45°C.

Two four-tonne aluminium personnel transfer tenders transport up to eight expeditioners and 150 kg of baggage from the ship to Antarctic stations. Small cranes lower the 8.2 m craft over the side of the ship with people and cargo already loaded. The tenders are powered by two five-cylinder diesel engines for speed and control.

There is a third passenger tender at the stern. It's located at the back of the ship so it can access the pool of open water behind the ship when it’s locked in ice. This is important for safe helicopter operations and to support deployments of some scientific equipment.

A dedicated science tender (see video below) adds an additional research capability that works independently or together with the Nuyina’s scientific systems.

The vessel has its own state-of-the-art equipment for marine and geoscience work in open water and ice. This includes a sound velocity profiler for oceanographic work and moon pool for the deployment of instruments through the hull, even in rough seas. It has a multibeam bathymetric echo sounder to map the sea floor, including in shallow uncharted areas where it could be dangerous to sail Nuyina.

The tender can also tow scientific equipment and small trawl nets, and its small crane (known as a side davit) can launch scientific instruments over the side.

The 10.3 metre-long, 3.5 metre-wide vessel even has a few modern conveniences, including a heater, defroster, sink and toilet. It is operated by two crew and accommodates up to six personnel and 500 kilograms of cargo.

The hardest working vessels in the group are the two aluminium barges. As the key ship to shore connectors, the barges do all the heavy lifting of cargo used to sustain human life in Antarctica and build the stations of the future.

The barges can carry trucks loaded with shipping containers for a ‘load on, roll off’ operation. They are each capable of carrying more than 45 tonnes of cargo at a time. Shipping containers and other cargo can be loaded using cranes on the ship and at the station wharf.

The barges are 16.3 m long and 6.2 m wide. Each barge has two 448 kilowatt (600 horsepower) engines and a water jet propulsion system that provides greater manoeuvrability than propellers. This propulsion system means the barges don't have any external propellers or protrusions below the hull, so they can sit flat on the cargo holds’ hatch covers near the bow.

The barges can operate in calm seas and up to 50 knots of wind, at a speed of 8 knots. Their rubber fenders allow them to operate in grease ice, as they can nudge bergy bits out of the way. 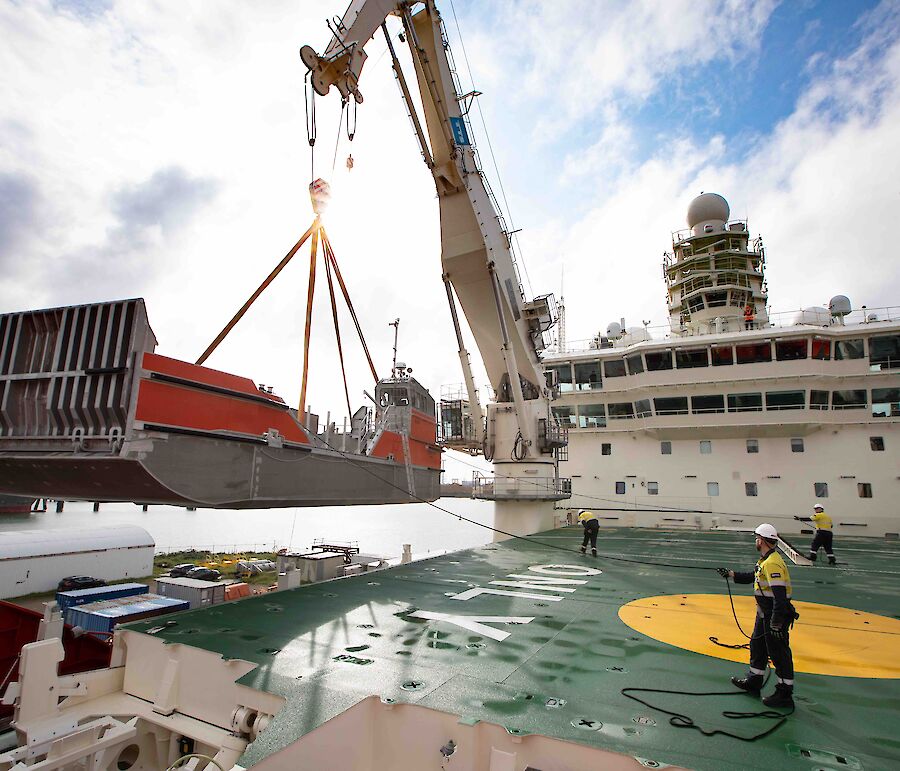