The Airbus A319-115LR is a modern twin engine aircraft with a range of 5000 nautical miles, providing the ability to fly Hobart to Antarctica and return without refuelling, a total of almost 4000 nautical miles.

Intercontinental flights operate during the summer months and land at the Wilkins Aerodrome, 70 km southeast of Casey.

The intercontinental flight takes approximately four hours and 30 minutes in either direction, and the aircraft typically spends two hours on the ground in Antarctica before returning to Hobart.

Passenger numbers depend on the requirements of the Australian Antarctic Program. The aircraft usually carries up to 38 passengers. The aircraft’s flexible configuration provides for the transport of a combination of passengers and high priority, lightweight cargo. The Airbus A319 also has the capability to provide a rapid medical evacuation capability.

The A319 is leased and operated by Skytraders Pty Ltd. 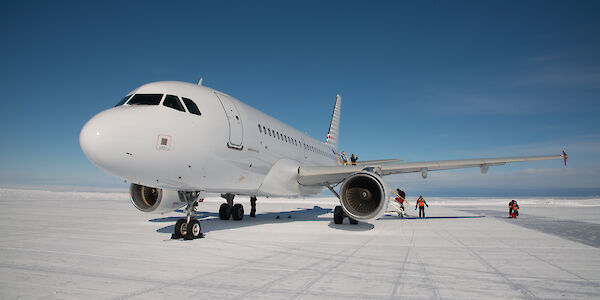 A319 aircraft idling on the runway

The A319 aircraft idles on the runway at Hobart, prior to departure to Casey.
Share

See all
This content was last updated 4 years ago on 27 February 2019.