For early explorers, ground transport on the Antarctic continent was fraught with difficulty and danger.

Roald Amundsen’s achievement of being the first to reach the South Pole on his 1911 expedition was due in part to his strategic use of huskies to haul sledges heavily-laden with survival supplies. In contrast, Robert Scott’s preference for man-hauling and ponies slowed his expedition’s progress, and made for agonising work for both the men and the animals.

Following Amundsen’s example, Douglas Mawson employed both dogs and human power to move precious cargo on his 1911 expedition – food, shelter and the samples scientists had collected. Nevertheless, the wind-swept ice made for difficult movement across terrain full of crevasses and the extreme weather conditions.

From the mid-20th century, machine power largely replaced man-hauling and dog sledges for long traverses. The Weasel was the first mechanical oversnow vehicle to be used by Australia on the Antarctic continent. Tractors, such as the Caterpillar D4, were used in the field and on station. 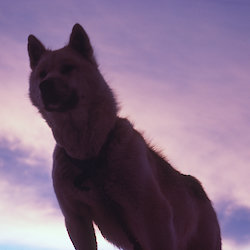 Huskies
This page was last updated 2 years ago on 1 August 2018.