To capitalise on the achievements of BANZARE, plans turned towards the establishment of permanent Australian Antarctic stations that could support scientific research and exploratory work. To support this proposal, the Australian government purchased Wilkins' ship the Wyatt Earp. However, the onset of World War II deferred further plans.

The years following the war saw a revival in Australian interest in Antarctica.

As a result of lobbying by Sir Douglas Mawson, in December 1946 an inter-departmental committee recommended that the government commit to future Antarctic expeditions. In 1947, a number of reconnaissance flights were conducted over the Southern Ocean. However, the principal aim was to establish permanent scientific stations on the Antarctic continent.

The government moved quickly to approve the immediate establishment of scientific research stations on Heard Island and Macquarie Island, and the use of the Wyatt Earp to reconnoitre a site for a permanent station on the Antarctic continent.

To coordinate preparations for the work, an Executive Planning Committee was established in May 1947, with Sir Douglas Mawson as advisor. Group Captain Stuart Campbell, who had been in charge of BANZARE flying operations, was appointed chief executive officer of the expedition. In August 1947, the expedition was formally given the title, ‘Australian National Antarctic Research Expedition’ (ANARE). Dr Phillip Law, a physics lecturer at the University of Melbourne, was appointed to plan and organise the scientific program.

In the first season of ANARE, stations were established on Heard Island, in December 1947, and at Macquarie Island, in March 1948 using the naval vessel LST 3501.

Meanwhile, the Wyatt Earp sailed south to find a site for a continental station. Although weather and ice conditions prevented the small ship from reaching the coast, the voyage achieved some of its scientific aims. However, it was clear that Wyatt Earp was not suitable for the conditions. Another six years were to pass before ANARE secured a vessel capable of navigating in difficult ice conditions, the Kista Dan. Its greater cargo capacity to transport building materials, and ability to transport small aircraft for surveying and mapping work broadened ANARE’s opportunities.

Despite not achieving the continental part of the program, the first expedition was deemed a success with the government granting ANARE a permanent footing. ANARE embraced the activities of both government and non-government bodies in Antarctica with a central focus on scientific research including: 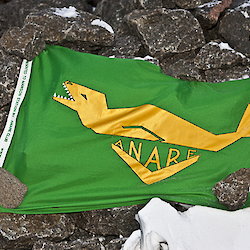 ANARE Club
This page was last updated 3 years ago on 20 September 2017.