Weddell seals are large animals. Both adult males and females are about 3 metres long and weigh around 400–500 kg. The head is small relative to body size and the colour is usually dappled grey and black on the back with a mostly white under-belly.

Weddell seals have a circumpolar distribution and are coastal, staying around the fast ice and venturing only 15–20 km into the Southern Ocean to feed. Weddell seals haul-out onto the fast-ice to rest and moult, and for females to pup.

Weddell seals are incredibly placid sedentary animals. They can be approached without much apparent stress to the animal. When they haul-out they remain close to their access hole on top of the ice. Underwater they remain relatively close to their breeding colonies, usually within 50–100 km though occasional migrations of several hundred kilometres do occur, especially by juveniles.

Weddell seals are the most southerly ranging mammal to permanently inhabit the continent. Sightings of the seals have been made in New Zealand and Australia, though they are very rare indeed.

The under-ice environment is relatively safe from air breathing predators such as killer whales and leopard seals.

Because Weddell seals breath air and live under the fast-ice, they must breath through cracks and holes in the ice cover. There are many cracks in the ice during the warmer summer months.

During winter these openings freeze over and Weddell seals use their canine and incisor teeth to rasp open the new ice and so maintain holes through which to breathe. Maintaining these breathing holes results in teeth wearing down to such an extent that the animal may eventually be unable to feed or keep the precious holes open. A seal must find its way to the breathing holes before it runs out of oxygen. Their powers of navigation must be highly accurate as they must find these holes even during the darkness of winter.

Weddell seals haul-out onto the stable fast-ice to rest and moult, and for females to pup, returning to the same area each year. Females of 6 years and over give birth in October to 1 pup per year. Pups weigh 25–30 kg at birth and mothers care for them for 6 weeks by which time they have grown to 110–140 kg. Pups learn to swim and haul-out of the water from 1 week old.

During the breeding season males defend underwater territories from other males for access to breathing holes and females. Both male and female seals vocalise, males may do so to maintain established territories. The only observation of mating (Cline et al, 1971) reported that it took place under water for 5 minutes or more. The male maintained rhythmic body undulations at a rate of 160 per minute.

Weddell seals are carnivores. Their food varies with time and location but mid-water (pelagic) and bottom dwelling (benthic) fish, squid, octopus and prawns are common. One seal was repeatedly observed to capture a fish weighing more than 40 kg. Weddell seals are very capable divers, remaining under water for up to 45 minutes and reaching depths as great as 720 m in search of prey. Lengthy shallow dives are probably exploration dives for new ice holes and food sources.

The Australian Antarctic Division has undertaken a long-term study of the Weddell seal in the Vestfold Hills near Davis station, Antarctica. The study focuses on: 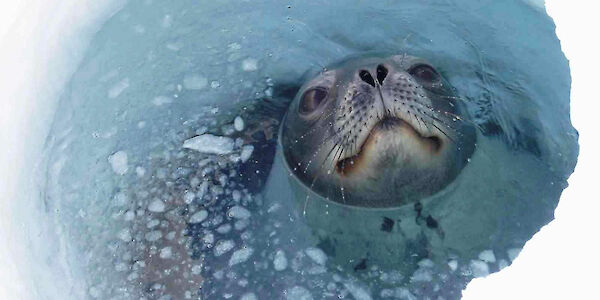 This seal is holding its nostrils just above the water and taking some breaths.

This call is a long high whistle, falling in tone.

This call consists of repeated chirps. 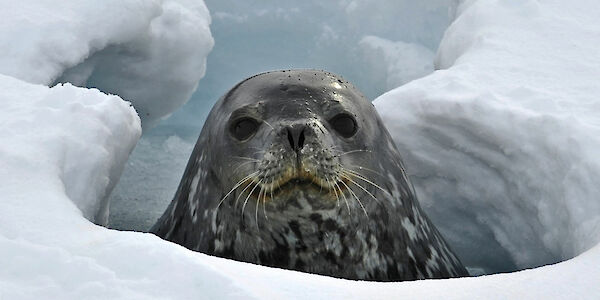 This call is a single, slowly descending tone. 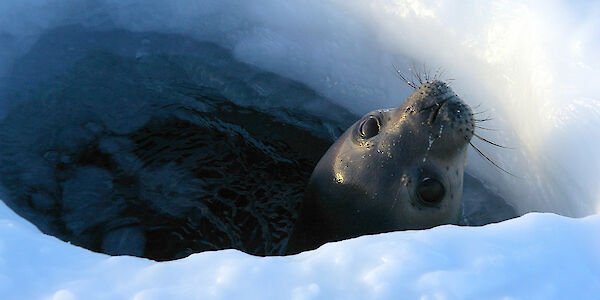 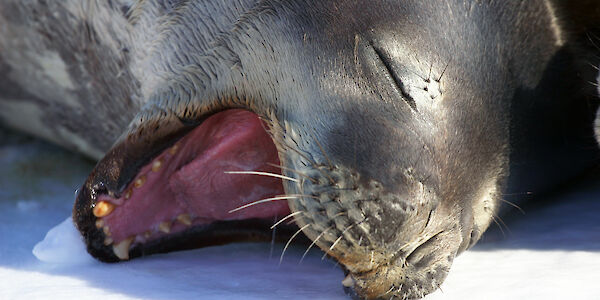 This seal has a nice big yawn while resting on the ice.
Share