Emperor penguins are amazing birds. They not only survive the Antarctic winter, but they breed during the worst weather conditions on earth.

Our research aims to learn more about the penguins (how they live, where they go, what they do, and what they need to survive), and how human activities may impact on their lives and survival chances.

The emperor is the largest of the 18 penguin species. Adults can weigh up to 40kg at the start of the breeding season. Historically, there were some penguin species even larger than emperors, weighing perhaps 100kg! These mega-penguins became extinct several tens of thousands of years ago.

Some emperors live to more than 40 years but most do not live that long in the wild. Their closest relatives are king penguins.

Special adaptations to the cold

Emperors have excellent insulation in the form of several layers of scale-like feathers — it takes very strong winds (over 60 knots or about 110 kilometres per hour) to get them ruffled. In proportion to their overall size, they have small bills and flippers to conserve heat. Their nasal chambers also recover much of the heat that is normally lost during exhalation. Emperor penguins have large reserves of energy-giving body fat and a relatively low level of activity during winter. They are very social creatures, and one of their survival mechanisms is to huddle together to keep warm. This huddling instinct means that they do not defend any territory. The emperor penguin is the only species of penguin that is not territorial.

Emperor penguins have the ability to ‘recycle’ their own body heat. The arteries and veins lie close together so that blood is pre-cooled on the way to a penguin’s feet, wings and bill and warmed on the way back to the heart.

Emperors’ feet are adapted to the icy conditions. Like other animals that live in the polar regions, special fats in their feet prevent them from freezing. Emperors have strong claws for gripping the ice.

Emperor penguins breed in colonies scattered around the Antarctic continent. Colonies range in size from a few hundred to over 20,000 pairs. Most colonies are situated on the fast-ice that is locked between islands or grounded icebergs.

Emperor penguin populations are projected to undergo a moderately rapid decline over the next three generations owing to the effects of projected climate change. Researchers are studying the influence of climatic changes on populations and how future environmental change may impact the species.

Emperor penguins are the only animals that breed during the Antarctic winter.

The emperor has not only evolved special physical characteristics to help it survive the extreme Antarctic conditions, it has also developed some unique social behaviours such as huddling. Like most penguins, emperor parents closely share parental duties once the chicks have hatched. But only the males take on the incubation duties.

Emperor penguins are exquisite divers! While they mostly forage at depths of 150 to 250 metres, the deepest dive recorded was to 565 metres. On average, dives last 3 to 6 minutes but the longest dive on record was 22 minutes.

Emperor penguins are near the top of the Southern Ocean’s food chain. They have a varied menu that changes with the season. Some prey items are more important than others. One of the most frequently eaten prey species is the Antarctic silverfish Pleuragramma antarcticum. They also eat other fish, Antarctic krill and some species of squid. Most prey items are small. Since they are very cold when ingested, their small size makes it easier to bring food up to body temperature to digest it.

An adult penguin eats 2–3kg per day. When they need to fatten up before a moult or at the start of the breeding season, they can eat as much as 6kg per day.

Breeding adults have to fill up their stomachs before they return to the colony. They need to feed their chicks and the colonies are often a long way from the fishing grounds. A chick needs about 42kg of food from each parent.

Emperor penguins have to face freezing conditions including katabatic winds that blow off the polar plateau and intensify the cold. Emperor colonies also face blizzards of up to 200km/h. To keep warm, the males close ranks to share their warmth. When carrying their incubation fat, emperors are about as large around the chest as an average man. On very cold days, as many as 10 of them pack into every square metre of a huddle. In the huddle, individuals seem to temporarily lose their identity, and the group takes on the appearance and behaviour of a single living entity. On a functional level, huddling cuts the heat loss by as much as 50%, and enables males to survive the long incubation fast. The warmer they are, the longer their fat lasts. The temperature inside a huddle can be as high as +24°C.

On a social level, huddling behaviour is an extraordinary act of co-operation in the face of common hardship. Emperors take this to an extreme taking turns to occupy the warmest and coldest positions in the huddle. On windy days, those on the windward edge feel the cold more than those in the centre and down-wind. One by one they peel off the mob and shuffle, egg on feet, down the flanks of the huddle to join it again on the leeward side. They follow one another in a continuous procession, passing through the warm centre of the huddle and eventually returning back to the windward edge. Due to this constant circulation, the huddle gradually moves downwind. During a 48-hour blizzard, the huddle may shift as much as 200 metres. 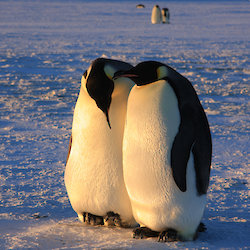 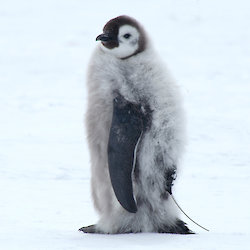 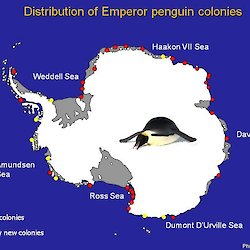 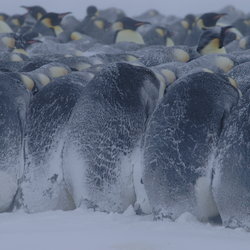 Adapting to a changing environment