Macquarie Island and its waters to three nautical miles are gazetted as a Tasmanian Nature Reserve. The island, including the waters out to 12 nautical miles, was inscribed on the World Heritage List in 1997 on the basis of its outstanding natural values. The Commonwealth Macquarie Island Marine Park lies to the south and east of the island and covers about 16.2 million hectares.

Access to many coastal areas of the island is restricted during periods of the year in order to protect threatened wildlife species, critical habitat, special ecosystems or historic localities. Rangers from the Tasmanian Parks and Wildlife Service based on the island, advise expeditioners of these special management areas.

Wildlife abounds on the island with large numbers of seals, penguins, and many species of sea bird including petrels being present. It is quite common for seals and penguins to rest in the shelter of the buildings around station so care must be taken to minimise disturbance at all times.

The island’s prolific plants and wildlife are a research paradise for botanists and biologists alike.

Since the time of its discovery in 1810, Macquarie Island has had a long history of exploitation. Sealers operated on the island for over a hundred years until the industry ceased in 1919. Between 1911–1914 it was the subantarctic radio base for Australia’s first Antarctic expedition, under the leadership of Sir Douglas Mawson.

The Federal Macquarie Island Marine Park was declared in 1999. Covering more than 16 million hectares, it was declared to protect the habitat of threatened species such as the royal and southern rockhopper penguins, the subantarctic fur seal, southern elephant seal and five species of albatross.

In 2008, researchers working on the island recorded extensive areas of ‘dieback’ within the endemic cushion plant species, Azorella macquariensis. A collaborative response program was developed between the Australian Antarctic Division, Australian National University, Tasmania Parks and Wildlife Service, Royal Tasmanian Botanical Gardens and the Resource Management and Conservation Division of the Tasmanian Government Department of Primary Industries, Parks, Water and Environment. In 2015, after extensive research, scientists found the plants were dying due to drier and windier conditions caused by climate change. An insurance population of the plants has been set up on the island, a seed bank established, and monitoring of the dieback continues.

Rabbits, rats and mice, brought to the island over nearly 200 years of visitation and occupation were finally eradicated in 2014, after a seven year, $25 million eradication project. With grazing pressures removed, the island is returning to its former lush, green glory. 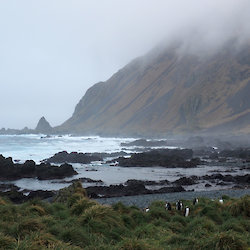 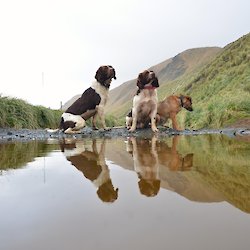