Running on solar power are up to 14 sensors and a satellite transmitter. New technology means very low current consumption — which means a smaller battery, a smaller solar panel, all making a lighter and more aerodynamic unit.

Once put in place weather stations are rarely visited, if ever. This means they need to be extremely reliable.

Stations read weather information and send the data via satellite.

Both above and below the surface of the snow they measure:

Weather stations have some of the same sensors at different heights. This allows us to measure microclimate in that region.

Temperature at sub-surface 10m does not vary on an annual basis and represents the mean annual temperature for that site.

The Australian Antarctic Division has been deploying Automatic Weather Stations in remote Antarctic sites since October 1984.

This generation of weather stations are developed as a joint venture between the Australian Antarctic Division and local Tasmanian company, Climetrics.

New technology and design philosophies are making it possible to measure temperature at what is believed to be the coldest place on earth — Dome Argus (Dome A). The station deployed at Dome A was tested down to −90°C, which is outside the specifications of −55°C set by the component manufacturers. The daily temperature data from the Dome A station is a joint initiative between the Australian Antarctic Division and the Chinese National Antarctic Research Expeditions. 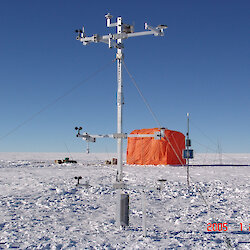